Plan your event at Aesop’s Playhouse

Our big-top amphitheater is a popular place for fairy-tale weddings and other private events.

The most colorful place in the East Bay to enjoy children’s community theater is at Aesop’s Playhouse, Fairyland’s exciting main stage. From July through October, our talented cast brings stories from around the world to life. See our schedule for show times. 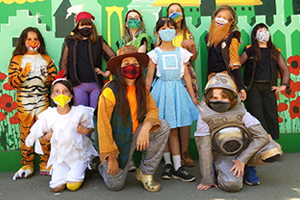 Ozma of Oz
Shows begin July 10
Saturday, 10 a.m. and 11 a.m.
Sunday, 2 p.m. and 3 p.m.
Join Dorothy as she returns to Oz for an adventure with a new set of friends (and a few familiar ones). How can Dorothy and Princess Ozma save the people of Oz from the wicked Nome King? How can a chicken and a mechanical man help? Adapted from one of Frank Baum's popular books, this sequel to the Wizard of Oz is full of wonder and brings his classic American fairy-tale to Fairyland's stage. 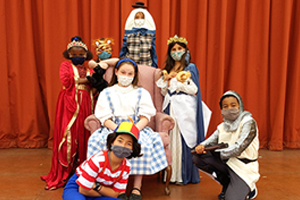 Looking-glass
Shows begin July 17
Saturday, 10 a.m. and 11 a.m.
Sunday 2 p.m. and 3 p.m.
Follow Alice to Looking-glass Land to meet Humpty Dumpty, Tweedle Dee and Tweedle Dum, and a host of other characters in our new adaptation of Lewis Carroll’s delightful book. Join her from one adventure to the next as she travels through the upside-down and backwards world behind the mirror. 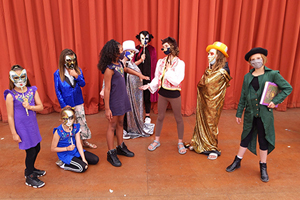 El Principe Oso (The Bear Prince)
Shows begin July 24
Saturday, 10 a.m. and 11 a.m.
Sunday 2 p.m. and 3 p.m.
In this Spanish folk tale, a woodcutter's daughter finds herself wrapped up in a wonderful adventure with a magical bear, who is not exactly what he seems. When he is spirited away, to a castle beyond the sun and moon she comes to rescue him, but will they have enough magic tricks and transformations to escape?

Since 1957, Fairyland has been encouraging children to create their own live theater in the park. Starting with teenage Storybook Hosts in ’57, and becoming the Fairyland Personalities in 1960, the program evolved into The Children’s Theater program and has been lead by Dr. Doyle Ott since 2008. In the theater program, children ages 8 - 11 portray characters from world folklore and Children’s literature in stage productions. They also make outside appearances representing the park at community events and parades. Auditions for the Children’s Theater Program are held once a year in January/February. Find out about the audition process.

Aesop’s Playhouse accommodates over 200 people in festival seating and was funded entirely by Oakland’s Measure DD, a $198.25 million bond measure passed by voters in 2002. Oakland-based Ace Architects designed the structure; Scientific Art Studio of Richmond created the fanciful sculptures of Aesop and his characters.

In addition to our own children’s theater, our playhouse has hosted the Bay Area Children’s Theatre, Oakland School for the Arts, the Pacific Boychoir, the Oakland Ballet Company, popular characters from KQED, and a host of young performers from local schools and community arts groups.