Your tax-deductible contribution helps us produce original puppet shows at the longest-running puppet theater in the U.S.

All shows that grace the stage of Fairyland’s Storybook Puppet Theater are original productions, featuring scripts, costumes, music, and sets designed by our talented puppeteers. Don’t miss a chance to watch a production at the oldest continuously operating puppet theater in the U.S.

Get your park tickets now!

Puppet shows have returned! We're offering more shows to help keep the audience sizes smaller. Face masks must be worn during the performances. Please, no eating or drinking during the shows. 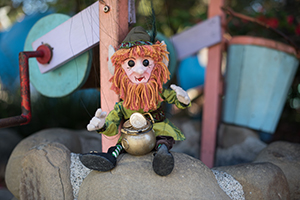 An original tale from Ireland about the care and handling of leprechauns. Three brothers want to marry Meg, but which can outsmart Wily Liam the leprechaun? Puppets and script by Randal Metz. 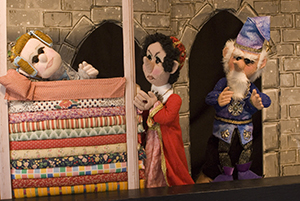 Another Princess and the Pea – starting September 1

Prince Timid’s mother wants to prevent his marriage so devises tests for the Princesses who wish to marry him. Enter Princess Maladroit, the most unlikely of choices. Through a series of comic exploits, the Princess passes the test and foils the Queen’s plans. Based loosely on the Hans Christian Anderson classic tale. Puppets and script by Randal Metz. 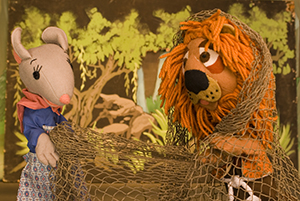 Three famous fables are combined in our story to teach children about playing together and being part of a family. The show features the tales of “The Tortoise & The Hare”, “The Lion & The Mouse” and “The Grasshopper & The Ant”, and features authentic Greek music. Puppets and songs by Lewis Mahlmann. Adapted by David C. Jones.

Puppet shows are included in the cost of your park ticket!

History of the puppet theater

Since we first parted the curtains in 1956, some of the country’s most gifted puppeteers have worked at our theater. The list includes Luman Coad, Frank and Dorothy Hayward, Tony Urbano, and husband-and-wife team Mike and Frances Oznowicz.

The theater’s fourth director, Lewis Mahlmann, held the position from 1967 to 2005. The current theater director, Randal J. Metz, has worked at the park since he was a grade-school apprentice to Lewis Mahlmann. Randal and Lewis shared the director’s job beginning in 1991, and Randal became sole director when Lewis retired in 2005.

The puppeteers of Storybook Puppet Theater use different kinds of puppets to tell their stories. Check the calendar to see what’s on stage during your visit. Bunraku—In this Japanese form, puppeteers share the stage with their puppets, manipulating them using handles. Complicated puppets require up to three puppeteers.

Hand Puppets—Many classic puppet shows, including Punch and Judy, use hand puppets. The puppeteer manipulates the puppet’s movements with his or her hand.

Shadow Puppets—This form originated in Indonesia in ancient times and is sometimes known by the Balinese name “wayang.” Figures are attached to sticks, with the heads left free to swivel.

Some Thoughts on Fairy Tales, Folk Tales… and Puppet Shows

Most of our puppet shows are based on classic fairy tales and folk tales. Some of these stories have been around for more than a thousand years, like Cinderella, which dates back to 9th century China. We have over 150 puppet shows in rotation at Fairyland, and it takes more than a year to create a new one. Thus, many of our shows have been around for quite a long time. American society changes. What we think is suitable for our children changes. But as fantasy expert Jane Yolen has written in her book Touch Magic, one thing about compelling fairy tales stays the same: “The idea that peace and happiness can only exist on some condition” (Yolen 26). If everyone in a story is full of joy from beginning to end, it will not make for a very good puppet show. There is no journey or growth. “A fine story – whether for children or adults – should reflect both dark and light, both shadow and glare” (Yolen 33). It is worth noting that our puppet shows are not just for children and adults; they are for babies, toddlers, pre-schoolers… the whole gamut.

Of course, it is possible for us to change stories to make them more amenable to our modern values. But some degree of tension is necessary. Sometimes this takes the form of suspense, mystery, or a scary or mean character. The protagonist has to use his or her skills to overcome this challenge. The child viewer uses higher order thinking skills to reflect on what they would do in the given situation, watches it unfold, and then judges the outcome. Much like when your child watches a movie or reads a book that introduces new or challenging ideas, one way to help the child process those ideas is to discuss them. They may want to share their feelings about someone being mean or not being a good friend. They may want to say that they don’t like a character because of the way he or she acted. On the other hand, they may say a character was kind or brave, or knew how to share. In the real world we will encounter both people who show us kindness and people who do not, and talking about fictional characters and how they affect each other and us, the viewers, will prepare us for those encounters.

In the psychology world, Dr. Reuven Feuerstein calls this sort of discussion between adult and child a Mediated Learning Experience. One common example of a Mediated Learning Experience happens when you are reading your child a book and stop to examine the illustrations together. Look at that character’s face, you may say. How do you think she is feeling? Oh, you think she is angry? Why is she angry? This sort of mediation slows the child down and helps them process what they see and hear. It prepares them for real-life interactions and makes them better observers and deeper thinkers. Feuerstein believes that intelligence is not fixed, and that mediating learning can increase a child’s brain-power. One of the great things about mediating learning is that parents and teachers are driven to do it not only because it improves critical thinking, but because it is fun! Riding the bus with a child is simply more fun when the two of you are looking around, asking each other questions, noticing the buildings outside of the window, and waiting for the exact right second to ding for your stop.

Mediated Learning Experiences can be very powerful, but ultimately, you decide what is right for your child. If you are concerned about a certain puppet show, it is always okay to leave. Furthermore, I welcome dialogue about your concerns, questions, or anything you read about in this article. Please contact Vicky Chen, Director of Community Outreach and Education. Thank you for reading, and enjoy Fairyland!